Algiers - The Underside of Power 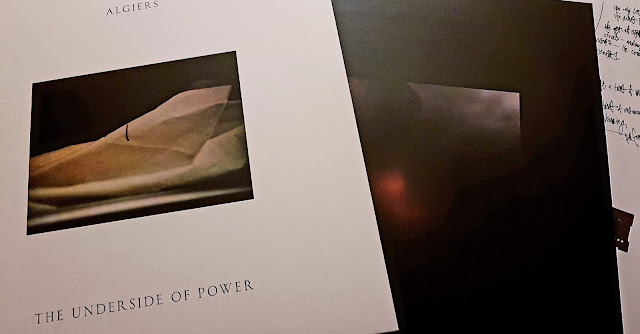 Stay calm, throughsilver; just write. Write, without proclaiming your need to do so. Just write about the album you told Dunc to buy, without having heard it yourself. That was a good recommendation: you just knew it was exactly what he needed to get on this trip to the UK. You can name this article about it and remove any suspense from this opening paragraph. That's it; write some initial thoughts as you have your first listen to... Algiers! The Underside of Power.

Ahem. So yeah, because I am still planning to write up my Albums In The Years, uh... 2013 to 2016 before doing last years best rekkids, keeping it chronological, I will get around that by just doing posts about the goodies. And I decided to do this one before I had even heard it. That's just how confident I am in my choices. The title track is pretty much classic soul, but a bit garagey. But it works; it really cooks. The singer, Franklin James Fisher, is the main reason for this, as he has a great voice. It's good and thick, drips with attitude, and he's got tons of fire when the occasion demands. That's right: you can weigh fire by the ton.

The hacks call Algiers post-punk, but I don't understand why, beyond the simple fact they are making music now, and we exist in a time after punk. "A Murmur. A Sign." is moody, pleading, as Fisher emotes over Stranger Things synth stabs. Straight after that is what would be a gorgeous piano ballad even without the layers of atmospheric sound adding depth to the mix that simmers beneath more great vocals that in this case are actually a little reminiscent of Holly Johnson. And then the propulsive beats, looped choral snatches and panning gang vocals of "Cleveland". It's brilliant.

I'd be happy for "Plague Years" to go on forever, a cold, wordless atmosphere piece of megaphone vocal loops, synth stabs and one hell of a beat. One of the collection of genres Wikipedia attributes to Algiers is industrial, and that one is pretty accurate. But even then, only in places. "Hymn for an Average Man" is two bluesy piano chords at its heart, joined at various points by disorienting, snaking piano and bass lines, and once more that fantastic voice. No Nine Inch Nails or Throbbing Gristle in this one.

"Bury Me Standing" (the titles are great, too) is more atmosphere, going all Sin City as saxomophones alternately hoot ominously and belch feeedback before giving way to the relative epic (over five minutes!) "The Cycle/The Spiral: Time to Go Down Slowly", more fast paced - a last burst of energy before the end. Really simple but effective lead guitar on that one too. Rock may not be reinventing itself any more, but as long as there are bands like Algiers, it'll at least be interesting.
by throughsilver at Monday, January 08, 2018