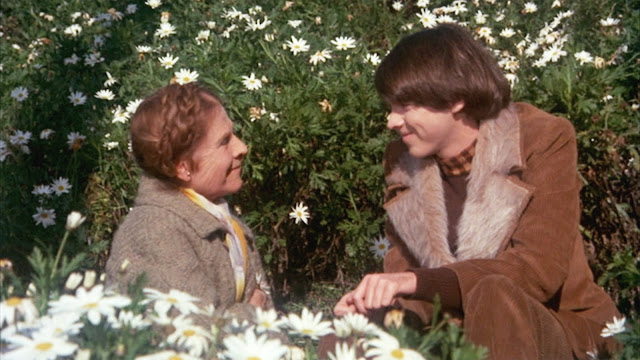 I've been on this seventies movie kick of late. I don't know why: I just tend to obsess about certain things at certain times, and make them "projects". I see very few of these projects through to completion, and write about fewer still. But that's the context.

Even though it was feted by all the "best of" lists I perused, something about Harold and Maude put me off. It wasn't a paranoid, political thriller. It didn't have car chases. It just didn't really seem like one of those great seventies auteur films. Plus, the title kind of made me think of Terry and June - not especially glamorous.

However, perusing Netflix, I hit upon one of those scenarios in which you can't agree on what to watch, so just plump for a choice that is least likely to annoy both parties.

I was really impressed. A very dark comedy about a 22 year old rich boy who gets romantic with a 79 year old woman who lives in an adapted train carriage, H&M (wait...) surprised me with the modern tone of its humour. Harold's constant staged suicide attempts, and the blase reaction of his super-posh mum, who has seen it all (played excellently by Vivian Pickles) put me in mind of Tim Burton or Wes Anderson, with their respective fondness for soft-gothic ennui and dysfunctional family units. They are no doubt massively influenced by this.

Also influenced is Ricky Gervais, surely. The awkwardness (the poor girls he meets on the "computer dates" his mum sets him up on bear witness to the "suicides", without Pickles' conditioning) is exquisitely drafted, and the very odd couple dynamic influential (Maude loves the odd side of life that she overwhelms Harold's rejection of society; they meet as funeral interlopers). On top of that, Gervais used Cat Stevens' "Tea for the Tillerman" as the theme for Extras. That song is one of many excellent Stevens/Islam pieces soundtracking the film.

Though Maude embraces life with all its eccentricities, she makes it clear from the outset that 80 is a good age to die. Just as Harold falls in love with her, she overdoses on her birthday. Such events in a comedy can be handled badly, but director Hal Ashby and writer Colin Higgins deal with it excellently, both in terms of how it plays out, and in Harold's reaction. The audience is initially led to believe Harold  - stricken with grief - commits suicide. However, he is merely ditching his car (a Jag modded to look like a hearse) as a presumably symbolic sloughing off of his old life, as he embraces his future for the first time.
by throughsilver at Wednesday, March 01, 2017