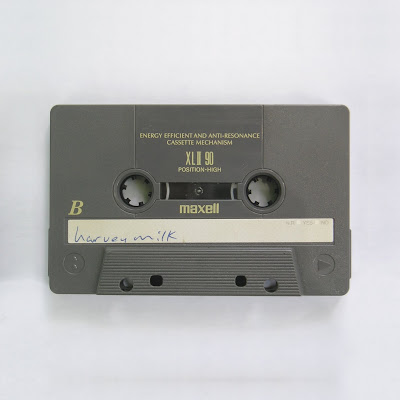 Following critical acclaim of Harvey Milk's latest album Life... the Best Game in Town (2008), current home, Hydra Head, has gone into the archives for this new/old album. Originally recorded in 1993 by one Bob Weston, these recordings never officially saw the long-playing light of day. Until now. The band is known for being somewhat curmudgeonly, and this proto-debut is fittingly nasty and strangely disconnected. Not for the 'Milk the youthful exuberance of early spotty Metallica or grinning Slayer.

It's classic sludge - true sludge, of a bygone era - which means that deep within its shroud of brutality is a real sense of melancholy. People think of the term 'sludge', with regard to rock music, and they think of bass-heavy, booming rock, that's not as sharply-mixed as more typical heavy metal and hardcore. But real sludge goes beyond the superficial, past the guitar sound of the Mastodon or Kylesa of today. It's music of the most direct lineage from the progenitors, Black Sabbath. Sludge is not about heaviness as personal empowerment: the Darwinian strength through aural brutality espoused by Pantera, Hatebreed or early Rollins Band. Sludge's heaviness is the unbearable weight of the world wearing on you.

'Merlin is Magic' has the snaking, heavy, guitar melodies of late Black Flag, at that point where their early, frenetic, assault had given way to the more philosophical frustration of the Henry Rollins era; guitarist Greg Ginn only too happy to take his guitar to similar places. But after the relative brevity of 'Merlin is Magic' and the more up-tempo 'Dating Pressures', we arrive at the ten-minute 'My Father's Life': proper badboy sludge that really lets you know what the genre's about. It begins slowly, quietly, as though it's a ballad. And then that massive, fat, guitar smears itself all over the mix, a walking melody line like a tramp trudging shit into your house.

As is the way with pacing on this kind of rock album, that epic is followed by a couple of short, faster tracks ('fast' sludge not being far off vintage punk rock in pacing and delivery), before more meaty fare is served up, in the shape of 'Jim's Polish' and 'F.S.T.P.'; together, they are as long as 5-6 of the shorter songs on the album combined. Maybe I'm biased, but its on these longer compositions that a band like this can really show you what they're made of.

'Jim's Polish' (whether it's about a can of Glade or the fact he's a compatriot of Stanley Kowalski is not made crystal clear) is an exercise in insistence. It settles initially into a single note, repeated over and over, drilling into your brain like Chinese water torture. It eventually develops into a fine display of sauropod-scale riffery, switching tempos from slow to slower, but the sheer agitation of that opening segment is glorious. Throughout, Creston Spiers bellows like a wounded bear. Sometimes he's aggressive and blustery, but at other times his roars are strangely affecting, like a much filthier version of Crowbar's Kirk Windstein.

This album is not a shining example of elite modern recording or production techniques. It was left unreleased at a time, within a scene that wasn't magnificently recorded (certainly not for CD) at the best of times. So, where even your Griefs and Buzzov*ens didn't quite equal The Orb or Underworld for 1993 production values, this Harvey Milk set is poorly produced. In all honesty, such murk is really a virtue. You can hear the muddy guitar, tree-trunk rhythm section and pained vocals, and that's all you need from this. It pays to be lo-fi in this game.

While the Bob Weston sessions aren't as advanced as either the 'proper' debut My Love is Higher Than Your Assessment of What My Love Could Be (1994, where some of the better songs here eventually ended up), or the belated breakthrough Life... The Best Game in Town, it's a fitting snapshot of a great band in chrysalis. It's also a fine example of 1993 second-tier sludge, below the real monsters offered up by Neurosis, Eyehategod or Dazzling Killmen. One for 'Milk completists, then, while we wait for the proper new album. That should be an ugly beauty.
by throughsilver at Thursday, February 25, 2010