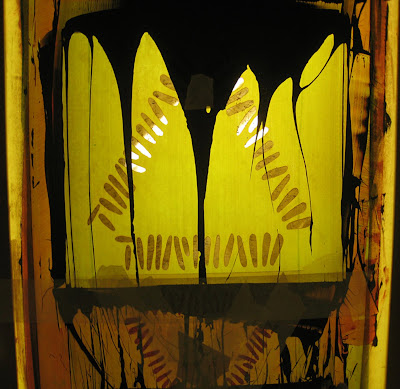 There is lush 'n' longing, and then there is Warpaint. You remember on Beavis and Butthead, when our brace of budding reviewers used to assume Pantera was just the singer, and not the band?* Warpaint is a quartet from Los Angeles, but on the basis of this record's bold personality and unity, could well be a single girl. And on Exquisite Corpse, our girl is in a club, eager to impress her potential bloke. As all three original members sing, this approach is probably for the best. The skeleton of the record is formed from fluttering guitar arpeggio, like eyelashes batted at you across a Minty Mudshake, though the songs are filled out with silky layers that never feel as though they're making the arrangement too busy.

After making a good first impression with 'Stars' and 'Elephants', the third song is fantastic, and also the most baffling on here. Named 'Billie Holiday', the chorus features just breathy spelling-out of the chanteuse's name. It's Faith No More's 'Be Aggressive' re-imagined by a distaff Great Lake Swimmers, all close-mic'd vocals and that muggy atmospheric humidity of nothingness, while Warpaint softly quotes Mary Wells at us in the verses: 'nothing you can say can tear me away from my guy...' It's vaguely insane, but performed with such aplomb and delicate touch that it almost reaches the heights of Hanne Hukkelberg's spine-chilling cover of The Pixies' 'Break My Body', from a couple of years back. And it has a false finish!

But for every ethereal slice of gently yawning loveliness such as 'Billie Holiday', or the opening 'Stars', comes something with more bite, like 'Elephants' or 'Beetles'. Having the songs alternate between Cocteaus-style opium dream sequence and near-Riot Grrl racket could have gone horrendously awry, but Warpaint walks that particular line with ease. The dynamics never threaten to tear the record apart. There is a definite progression here, as 'Beetles' sees Warpaint become agitated since earlier on in the record, bringing on the Sleater-Kinney nostalgia.

The end of the evening arrives in the form of 'Krimson'. Warpaint has grown tired, and more than a tad intoxicated. It's been a long one, she's all danced out, and has grown too impatient for any pretence at subtlety. So she hurls herself at the object of her affections, accompanied by a disco bassline. 'Hold me closer and don't ever let me go', Warpaint pleads, before having a little scream. Not sure what she wants any more, Warpaint complains 'I need a little room to sway / you hold me anyway'. It's getting late, and the bombastic declarations are coming thick and fast: 'I want you more than anyone ever wanted anyone before'. We're flattered, but it's probably time for a taxi...

Harmonies that are simultaneously tight and airy; melodies that largely couldn't be mistaken for anyone else. Sweet, sweet music that never gets cloying. Way more sophisticated than the (charmingly) messy Vivian Girls, but displaying that same knack for articulating the slow-death heartbreak of yearning. Without wanting to stir up controversy through positive comparison with anyone's album of 2009, this is nevertheless a perfect match for the lovely xx record.

* 'Damnit Pantera, this beer's warm! Get me another one!'