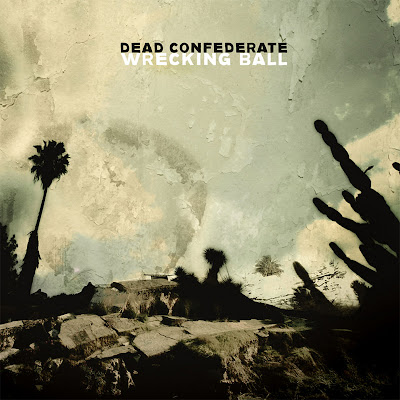 Wrecking Ball is good, old-fashioned rock music. Dead Confed being from the state of Georgia (in America, as opposed to the former Soviet republic), the traditionally exaggerated rawk twang doesn't come across at all exaggerated. The pleasure that comes from listening to opener 'Heavy Petting' or single 'The Rat' (the latter complete with super-pronounced 'bang-bueeerrrnng') is awesomely free from guilt. It's also devoid of the if-it's-not-ironic-it-should-be air that hangs over the likes of Wolfmother, Jet or Black Mountain.

A detail worth mentioning is Hardy Morris' eerie vocal similarity to the late Kurt Cobain: that combination of pure, angelic, voice drowned in anguished grit and growl is far more compelling than the feeble attempts of Bush and early Silverchair, back in the dim and distant mid-1990s. You get the feeling this is not totally coincidental, either, as 'Goner' features that near-doom pace, swinging-axe riffing and wolf-trapped-in-snare howl of 'School's cry of 'no recess!' It's the kind of song you can see yourself happily listening to, years from now.

Some have compared Dead Confed to Radiohead. Such comparison is not entirely without merit, especially when listening to the widescreen, resigned, languor of 'Yer Circus', which aims at a spot near the end of OK Computer, but would fit more comfortably on the cynical, beaten-down Hail to the Thief. Thankfully, though comparisons could be made to Radiohead, Nirvana or even Cave In's delightful, spacious Jupiter, there is enough Dead Confederate on show here to suggest this is a band that is more than a grab-bag of influences. 'Start Me Laughing's melodic rage might remind a tad of Pearl Jam, but when was the last time that band had this level of urgency? It was a lifetime ago, and this is where the album pays dividends. It's essentially a (bizarrely southern) Grunge album at a time when most of that scene's main players are either dead or redundant.

Not only is this album a teensy-weensy bit derivative, but when the band slows proceeds down a notch, as on the lengthy 'The News Underneath', the quality dips. Live by the blues-tinged southern rock sword, die by the southern blues-rock ballad, it seems. 'Flesh Colored Canvas' is marginally better – it's aiming more for 'epic' than 'long ballad', even if it doesn't quite work – but even longer than the other one. Together they combine for 19 minutes, but it may as well be 19 hours. Or 19 months. 'Dry County', by Bon Jovi is a straight-up better long southern ballad (and from a northern band). And that's without getting into the actually really good stuff, like 'Tuesday's Gone', by Lynyrd Skynyrd, or Ted Nugent's 'Stranglehold'.

Luckily, this seemingly contractually obliged balladry is confined to two of the album's ten tracks; the rest of the record ambles on at a decent pace, with a respectable amount of intensity. This isn't, as press shots might indicate, the rawest, hungriest sound in rock. Compare it to golden oldies like Zeke, The Cramps, Harvey Milk or early Mondo Generator, and Wrecking Ball's pop sensibilities are suddenly evident. It'll come as little surprise, then, to learn that Dead Confederate were 'discovered' by Gary Gersh, the man what brung Nirvana to Geffen Records. Take this record for what is is – a nearly-great collection of well-performed southern rock songs with just enough bark and bite – and you'll find a real grower. Wrecking Ball rewards repeated listens, and bodes well for the future, especially if they take any inspiration from one-time tour-mates, and fellow Georgians, the Black Lips.

by throughsilver at Thursday, December 17, 2009