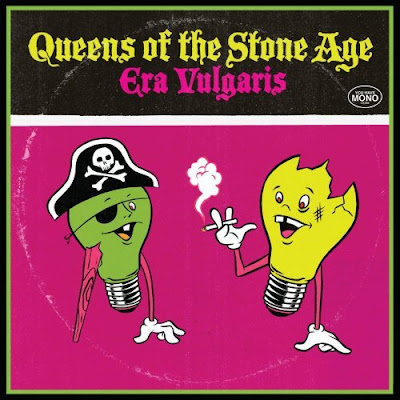 Right, seeing as I tend to preface these things with a brief history of the artist and I, here’s the skinny on Homme and throughsilver: I have to admit that I wasn’t on at the ground floor with QOTSA. I didn’t get the album on Loosegroove. I in fact waited until 1999 to get the first album because I was (am) a big Kyuss fan and didn’t like the prospect of what Homme admittedly satirically referred to as ‘robotic trance rock’. I got it in the end, and loved it, so it was all good.

I then went a bit crazy (in a good way) and got the EPs, all the Desert Sessions stuff, and went on to buy all their albums as soon as they were released. It was great up to and including 2000, which is when I got the excellent Rated R as well as the fifth and sixth instalments of Desert Sessions, but sadly turned a bit sour by 2002. Songs for the Deaf was a bit mediocre for them; it opened with a Desert Sessions rehash (I generally don’t mind their re-workings, but not to start a new album!), had those annoying ‘DJ’ segments, and pretty much every song seemed to go on a minute or two too long. The less said about Lullabies to Paralyze, the better.

So it was with no small amount of trepidation (and very little optimism) that I bought Era Vulgaris. I had downloaded it, but couldn’t even be bothered listening to it. Still, I saw it in the shop and decided I might as well get it bought. I am heartened to report I was in for a very pleasant surprise. The initial impression the album left on me was that it seemed to be a legitimate progression from the sound Josh had been working with in the late nineties, as opposed to the last album (and, to a lesser extent, the one before that). The strange yet compelling riffs were back, along with that gorgeous guitar tone (that’ll be Chris Goss producing then) and the willingness to throw the listener some aural curveballs – as opposed to that rather homogenised major-label-band sound they had ended up with.

‘Into the Hollow’. So the Lanegan song is predictably good (and I kind of miss it after all we got last time was that lullaby to kick off the album). Only time will tell quite how good a Queens & Lanegan song it is, but I very much doubt it will beat the absolutely serene ‘In the Fade’ on the all-time list. Still, it’s lovely enough to remind me of that balmy summer afternoon in 2000 when I first heard Rated R. Maybe it’s just because it’s June and I’m currently in the same room as I was then. The only real difference is that I am reading Hi-Fi+ as opposed to Too Much Coffee Man.

Overall this does seem to be rather musically braver than the last two albums (admittedly not a hard task to accomplish). The riffs really are wonky and rude, as though the guitars bungee cord had been stretched too tightly in the direction of the mainstream over the last half-decade; it has now snapped back into strange rhythms, a hook-less world, devoid of accessibility yet strangely catchy in its own way. Indeed, the bungee cord has snapped back with such ferocity that it has actually flung the arrangements far beyond the realm the debut inhabited, into the Queens’ own Stone Age. This is not quite Kyuss-heavy, but that is ably compensated by the depth of the mix here. To say there is a lot going on would be an understatement.

‘Make it Wit Chu’. This is obviously a continuation of the grand QOTSA tradition of sticking a Desert Sessions song on their album. I don’t mind this instance, because the song has been sufficiently altered… and they didn’t make the lethal mistake they did in 2002 by opening the damn album with a rehash. This is more of a ‘Monsters in the Parasol’ type of success story, then, but I don’t know whether I prefer this to the original. It’s more sophisticated, definitely, but I love the laidback groove of the best Desert Sessions stuff, and the original has Polly Jean Harvey on it.

3’s & 7’s. I wouldn’t know where to begin with the grammar on here, so I shan’t. This is apparently the lead single and it rather echoes ‘Little Sister’ in its quality-without-ever-threatening-transcendence professionalism. It admittedly picks up about halfway through, so that’s a good thing. The snotty bass fill could even have been played by one Nick Oliveri once upon a time, though this is sadly far from the quality of ‘No-One Knows’ at present.

River in the Road. It’s a shame this one fades out after only three minutes, because its militarily-inspired percussion propels it along in quite the compelling manner.

So. The album, at fifty-four minutes, is still a bit too long for my liking, and it’s a shame Homme has forgotten how good albums can be when they can fit on one side of a C-90 (there’s a reason why Jebus made records twelve inches). Despite that, and the ostensible lack of a big finish*/hooky single (probably a blessing in disguise with regard to the consistency of the record), this is easily the most fun QOTSA album to sit through, and potentially also their best album, since 2000. If nothing else, it’s refreshingly pleasant for an old senti-mentalist such as myself to be able to say, with conviction: The Queens are good again!

Your move, Metallica and Radiohead.

P.S. I miss Dave Catching more than I do Nick Oliveri.
P.P.S. I am still waiting, with aching heart, for a collaboration with John Garcia, the best singer who ever featured on a Josh Homme song.