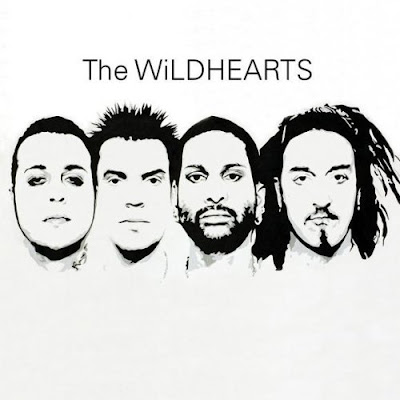 After being mightily impressed with the gig the other week, and the ensuing Wildies mini-obsession, I thought it might be an idea to treat myself to their new album. It is apparently good. So I got it, in Digipak format; the last album of theirs I had bought was released in 1997, so there was a little trepidation.

Of course, their performance of ‘Rooting for the Bad Guy’ was definitely heartening, and I was sufficiently cheeky to download their single ‘The Sweetest Song’ as something of a second opinion. The chorus of that one recalled Blink 182’s ‘All the Small Things’ but, despite that, I enjoyed the tune. I will go as far as to admit that the Blink 182 portion of which I was reminded was a pretty good bit, being as it was wordless vocal harmony. You see which bit I mean.

The initial listen to this eponymous album wasn’t overly positive. It certainly sounded to me like a good album, one that certainly didn’t bring shame onto The Wildhearts’ enviable oeuvre. There was just something about it that didn’t feel right. Dare I suggest it didn’t sound like The Wildhearts?

Whereas traditionally the reductionist rock media had always described the band as ‘pop metal’, the actual music was never that simple. Though the melodies and harmonies were unmistakeably pop (and we’re talking full on Beach Boys territory here, albeit filtered through the Ramones and Cheap Trick), and the guitars were more often than not metallic in their bludgeon riffola, the missing aesthetic link gluing the otherwise incongruous elements into a satisfying whole was punk rock.

Listening to such early gems as ‘Suckerpunch’, ‘Greetings from Shitsville’ and ‘Caffeine Bomb’ suggests little more than a band brought up on punk rock, recording in the early nineties metal tradition. Debut full length album Earth vs. The Wildhearts brought the pop, in the form of ‘T.V. Tan’ and ‘Miles Away Girl’. The melding of the pop and metal (with punk!) was then near-perfected on the under-rated 1995 album P.H.U.Q., which bore their trademark single ‘I Wanna Go Where the People Go’.

Back to the new album. The poppy melodies are back out in full force, which is a massive contrast to the literal noise-rock of 1997s Endless Nameless (we’re talking Xinlisupreme goes indie-strial). Present and correct, too, are the heavy metal riffs. The difference is the punk attitude seemed toned down on an album that recalled directly the cleaner sounds of Cheap Trick, Queen and even (a much better version of) Fountains Of Wayne.

Not that this was a bad thing per se, but it seemed as though the combination of iPod-friendly mixing, modern technology and various intangibles (a desire for mainstream success still? Forced sobriety straitjacketing Wildies mastermind Ginger? Who knows) had stripped the soul of the band somewhat, leaving in its place an eerily professional sheen to proceedings where once there was a trademark ramshackle spark of genius. The very first listen was a slightly tainted victory, then.

Another listen today has proven heartening indeed. It would now seem that the songs, poppy though they are, require time to which to acclimatise, for those hooks to really sink in to the cerebral cortex. Juicy! And I shouldn’t be surprised by such news: it took me a long time to appreciate Endless Nameless or Fishing for Luckies to the full (a few months) and it is only now that I can fully understand the nuance and depth of fifteenth-birthday-present P.H.U.Q. (another time, possibly later in what might reasonably be dubbed ‘Wildhearts Month’).

The main trick with an album such as this is to get to know the songs; after all, a catchy song is only of value when it is familiar enough to actually be catchy. The familiarity also aids getting into the longer songs (one of which, the opener bravely enough, is nine minutes), which recall the pop-metal-punk-prog of their magnum Fishing for Luckies set. That said, ‘Rooting for the Bad Guy’ is still a monstrous epic, ‘The Sweetest Song’ is still a catchy pop gem that unfortunately recalls Blink 182, and the compressed style of vocal harmonies still has an air of a much-better Fountains Of Wayne about it; perhaps knowing this is after all half the battle.

Fortunately, the trend suggests my positive affect for this album will grow with repeated listens and greater exposure. Most importantly, the soul of the band – Ginger’s wit and personality – does shine through from time to time, whether it’s in the ‘I wanted Tweety Pie crucified / I wanted Thunderbirds Kentucky Fried…’ opening chorus, the random tech-prog moments or the fact that he named the best song on the album ‘The Revolution Will Be Televised’ (and I don’t think there has been a political song this catchy since ‘Today’s Empires, Tomorrow’s Ashes’ by Propagandhi). Is it their best album? Only time will tell, but I lean toward ‘no’. It is, however, a quality rock album when so few bands in the spotlight are any good at all.

Postscript: As of the 17th May, this album is really, really good. Proper review in a bit.
by throughsilver at Tuesday, May 15, 2007