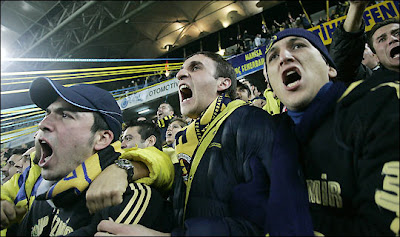 I didn’t watch the UK original series of this Danny Dyer vehicle, nor have I seen the film that inspired this whole shebang, The Football Factory. This might actually be less a review of the programme than of my current state of mind on deciding to watch this episode. My excuse is that Dyer was on Radio 4’s excellent Loose Ends today, and I trust what Loose Ends recommends. Apart from that time Jamie T was on.

Anyway, I have to admit to something of a ghoulish intrigue felt about the series as a whole; about the kind of thinking that goes on in the minds of football hooligans, about the group/mob mentality that overtakes these individuals come game time. And maybe the anodyne Dyer would poop his kecks. I caught the repeat of episode one tonight, which was based around the massive – and violent – rivalry between Istanbul teams Galatasaray and Fenerbahçe. One thing I did learn tonight was that Galatasaray (the European side of Istanbul) used to be the money club before it was mismanaged into massive debt, while Fenerbahçe, now filled with what Dyer termed ‘new money’, has resurged into pole position in the city.

The premise of the series sees Dyer travel to different countries, ingratiate himself with local hooligan ‘firms’ and film any violence that breaks out at matches. This episode saw him get temporarily ‘in’ with firms representing both sides in the run-up to a derby match between the two. Well, he was more in with Fenerbahçe’s Kill for You firm, as he watched the match in their area and wore one of their delightful white bomber jackets. Seriously, if any of the Galatasaray firm sees footage of this, he should never return to Turkey. Not that he ever would, as he mentioned his abject fear of filming this episode specifically: on account of the two Leeds fans stabbed here in the spring of 2000.

Not that I’m making light of the deaths, because I wouldn’t, but it seems like an odd fear to have. This is a man who feigns being ‘hard’ on the screen, for films and now documentary, actively seeking out what amounts to – if not the scum – certainly some scum of various major cities, and any violence that might surround them. Again, not making light, but people get stabbed everywhere in the world, and I sensed a very weird bit of insincerity in his over-sincerity as he stared right at the camera and gave a dramatic pause when he mentioned ‘the two Leeds fans… who got stabbed’. It was very weird indeed and, if I didn’t know better, I’d think Dyer was actively trying to stir up some tension in British viewers. You know, because documentaries about hooligans fighting each other need a bit of artificially-built drama.

The episode itself was watchable enough, though nobody, from Dyer to the opposing firms, came off at all sympathetic. The Galatasaray firm was painted as the ‘other’ in this binary; Dyer mentioned sensing an air of aggression from them (from hooligans? On the day of a derby? Perish the thought), and their interview was entirely predicated on how their clothing brand was big business, and made money for the club.

The Kill for You firm, meanwhile, was ‘our’ firm. A seated indoor interview with two of the alleged firm kingpins revealed such endearing details as the time one of them attended a derby with Galatasaray-supporting university friends, and how he threw lit flares directly at their heads. Lovely chap. Before the match, Dyer gets visibly drunk to numb his nerves (or poop), and there is some definite awkwardness as the Kill for You-attired Dyer feigns joy when ‘his’ team gains an early lead and eventually wins the match. He was ‘well out of his manor’, apparently.

Rather alarming was the fourth segment of the episode, devoted to smaller clubs’ firms. One club in particular (apologies, their name currently escapes me) made a habit of meeting its firm after each match, at the side of the pitch and accompanied by a Mafia-style firm head honcho. He had his arms round the players as they happily greeted the baying hordes. It was really rather interesting to see how in synch some clubs are with their respective firms.

I’m not sure I’ll be watching this programme too often, as I get the feeling this was the most dramatic (it was the last one filmed of a six week, nine country span) episode of the lot. Dyer certainly went on at length about how he’d never seen anything like it. I presume the rest of the series will just feature shots of him looking hard, asking firms about what they get up to, and acting nonchalant when they tell him. I would tell him to stick to his day job but, having never seen one of his films, I don’t even know if that would be wise. Actually, I might watch the Italy episode; they apparently don’t like the English.
by throughsilver at Saturday, May 26, 2007