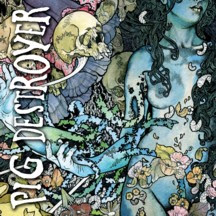 I have decided that I am going to post initial thoughts and reactions on this album as I listen to it for the first time in a stream-of-consciousness kind of way. These thoughts are so initial that the album is not in shops yet. I haven’t even burned the mp3s to disc yet. This is a straight up reaction to playing the brutality on my crummy computer. I apologise in advance for what is probably going to turn out rambling and insane, but I thought it might be a nice experiment in the Initial Thoughts genre, and it’s fun to experiment once in a while. What follows is a document of my instinctual, unedited, reactions only given thinking time of however long it takes for a thought to get from my little brain to my keyboard. Erk.

This is really technical, but absolutely horrible at the same time. and I mean that literally, as in it invokes a feeling of horror on a listener, rather than any strictly qualitative statement. There are bits of definite old school Slayer breaks, but with such a feeling of malicious intent.

Is a song called ‘Though Crime Spree’? Whatever it’s called, it’s probably the most impressive track yet. Well, it’s only track four, but it’s insane. Great drop-off to just the drums hammering out a beating on your brain, the guitars crunch back into action, and there is actually some melodic riffing going on. For a bit of context, their take on melodic riffing is pretty much on the level of the heaviest Pantera: I don’t see anything in the way of a ballad coming from these lads; ever. The riffs are great, and the blast-beats are insanely visceral. We’ve just had some inordinately high-pitched vocals, too. This is on the fifty-second ‘Cemetery Road’. The only word to describe this is that it shreds.

Onto ‘Lesser Animal’ now, and the switch from song to song is so instant and breathless, so devoid of anything resembling recuperative periods, that it reminds me directly of Converge’s Jane Doe. OK, a disturbo-sample about a man getting his face burned off, and that is our breathing space.

This album is so heavy that it is not a reincarnation of the shock-horror gore death metal of the late eighties, but a modern day equivalent; just as heavy today as that stuff was then. I can’t wait to get this on the Death Deck. The title track has a great mosh section, but even then it’s not that slow, and it has some Dillinger-style shredding over the ‘slow’ riff, and then the thrashy shredding comes right back to bite your face off.

While this music does sound very modern, there arte definite nods to the past, to death metal in particular, even while the strained-throat vocals recall the most boisterous of hardcore. Another great mosh section halfway into ‘Loathsome’. Great percussion, too, it has to be said – cymbal frenzy. No sooner do I write that, than a wonderful drum rhythm kicks in. the vocals have switched to that Kiss It Goodbye-influenced ‘very angry man trying his hardest to stay reasonable’ that is so much more satisfying than when you just get the angry in your mug. It provides a bit of relativism to make the angst that bit more intense.

All the tricks are being employed here, too. ‘Heathen Temple’ starts with a nice bit of feedback before exploding into what might be the fastest song yet. Things have slowed a tad, and this song actually reminds me a bit of late nineties Today Is The Day, and not just because it has ‘temple’ in the title; there is a great touch of ‘humongous insect’ vocal, and a gnarly, bassy riff. This might be the best song on the album thus far. This band gets through riffs like the world’s about to end, this most recent reminding me of 1986 Megadeth. Despite all this, though, they get away with it; it never actually sounds retro. This is probably because anything this heavy is automatically state of the art in metal circles.

The main reason I can’t wait to get this on the Death Deck, aside from playing it as loudly as possible, is to see exactly where it resides on the heaviness scale. Heavier than Dillinger Escape Plan’s Under the Running Board EP? Heavier than Jane Doe? Time will tell. Yeah, I think whomever wrote these titles hit a few typos. ‘Fopurth Degree Burns’ (sic)? I don’t think so. Great song though. There is a real At The Gates style urgency to the melodicism in a track like ‘Alexandria’. If this write-up is full of hyperbole, good. I’m not pretending to have any kind of critical distance here; it’s all about the visceral reactions being documented as and when they happen. Great chuggy mosh section about two thirds into the song too.

There is a definite sense of self awareness going on with Pig Destroyer, too, as they’ve called the current song ‘Girl in the Slayer Jacket’. I’d love to know what the vocalist is banging on about, because this one is particularly discordant and angry. Right, thirteen tracks in and I’m hoping there is not too much more to come. Not because it’s anything less than brilliant, but because this kind of album just has to have a ceiling of thirty minutes.

This riff on ‘Waist Deep in Ash’ really reminds me of the unstoppable marching that was the melody on Slayer’ ‘Seasons in the Abyss’, just with so many cuts into furious blast-beat that it’s taken onto a whole new level. The vocals remind me, again, of Tim Singer from Kiss It Goodbye and Deadguy. That is definitely a good thing. Onto ‘The Machete Twins’ now, and there is a definite throwback to the nineties on the serpentine lead guitar parts, slinking along the fret-boards all diabolus in musica like.

Right, the album proper is finished, and now playing is the seven and a half minute unlabeled track, in fine Coalesce swansong style. This should give me a minute to sit back and get a touch of distance on the album. It wasn’t amazingly hyper-modern, but one wonders where traditionally-arranged heavy music really has left to go. The band does well in melding the old school thrash and death influences with a metallic hardcore (dare I say Noisecore?) delivery, and it meshes well together, like an incredible heavy take on the Mastodon formula.

I have mentioned a couple of times about how the fast, energetic-to-the-point-of-overload type of music seems to have fallen out of fashion this decade, replaced both in rock and electronic music with the likes of sunnO)))/Khanate/new Earth on the one hand, and the critically unstoppable leviathan that is dubstep on the other. While that is all well and good, and I’m all for change, I was missing the music that just shreds and leaves you confused and motionless. We had Trap Them a few months ago with an irrepressible slab of speed noise, and now the mighty Pig destroyer have returned for the first time since 2004’s excellent Terrifyer with something that might actually be better.

Only time will tell, but if this remains no more than a tasty portion of fast fury I will be satisfied. I do think, though, that the months and years will to come will be very kind indeed to the album called Phantom Limb. And the music has just now finished.
by throughsilver at Thursday, May 17, 2007