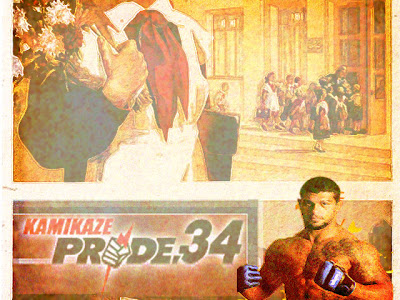 Well, I’ve already done a ‘best of times, worst of times’ intro, so I guess we now go with the fall of the Roman Empire. A few short years ago the greatest fighting promotion in the world, Pride got poisoned by the lead water pipes of alleged Yakuza involvement and, slowly, what was once the most celebrated, extravagant MMA promotion of them all became inexorably moribund.

Of course, Pride FC is not going to die per se. If anything, it is now subject to its most stable financial backer in its decade of existence, the Fertitta brothers. However, there is a definite feeling that this is the end of an era. Though we are also on the verge of a new, potentially heart-stopping, era in terms of dream matches becoming tangible, the Pride of old is gone.

Pride 33, in Las Vegas, was a stunning show that belied the true trouble the drowning promotion was in: it was a night of great fights, massive upsets and excitement. If only that was the swansong for Dream Stage Entertainment.

As the DSE-produced Pride splutters to its final demise, viewers are given Pride 34. An illustration of how things have changed in the fight world could not be starker. After Antonio Rodrigo Nogueira was seen sitting with Dana White at the ninth Ultimate Fight Night and Mirko Filipovic already fighting in the Octagon, the Pride heavyweight division has encountered a turning of the tables.

The Pride FC website mentions four heavyweight fights for this card, one of which being the epoch-defining Pride/UFC collaboration fight: Kazuyuki Fujita vs. Jeff Monson. This would seem not to be quite on the scale of fantasy matches such as Fedor Emelianenko vs. Tim Sylvia or Andrei Arlovski vs. Nogueira.

Though it lacks the sense of occasion such a fight should bring, this meeting should still be engaging on its own terms. Both are very physically strong fighters with decent wrestling and very heavy hands. Fujita has a definite chance if he can secure an early takedown and carefully pound (if that’s not an oxymoron) to stoppage from the mount. Otherwise, the fight seems to be all Monson.

I see Monson being slightly more accurate on the feet, even though his reach seems to be in the negative region. If ‘The Snowman’ gets a takedown on his terms, then Fujita is not likely to have sufficient submission defence to prevent the American 2005 champion of the Abu Dhabi World Tournament from doing what he wants. While Monson might connect with Fujita’s face in the way Wanderlei Silva did last July at Critical Countdown Absolute (or Fujita somehow controlling Monson for a decision), the theoretical money here is going on Monson by choke.

The heaviest fight on the card lumbers into view as Wagner ‘Zuluzinho’ da Conceicao Martinstakes on Eric ‘Butterbean’ Esch: a grand total of seven hundred and forty pounds in weight, apparently. Not the most thrilling proposition to this fight fan, Esch is likely to knock out the Brazilian giant. While grudging props go to Zuluzinho for certainly not shying away from definite losses in the past (his last two Pride bouts were against Rogerio and Fedor), he is not the most skilled fighter. He is unlikely to ground and submit the American, most known for Tough Man contests and concussing Johnny Knoxville, and I predict a short, painful night for the Brazilian, capped off with unconsciousness. The victim of that last bit might just be me, though.

Slightly more credible is the meeting of Don ‘Magnum P.’ Frye and James ‘The Debt Collector is a Better Nickname than Colossus’ Thompson. This is likely to go longer than the Butterbean fight above, but no less brawly. Frye is a bit of a legend in the sport, and another total gamer: he took on Jérôme Le Banner in a K-1 rules match in summer 2002, even though his destruction was almost certain. That was quite the knockout. Around that time, he took part in the famed head-punch-stravaganza that was his bout with Yoshihiro Takayama. Frye took that one, along with the features off Takayama’s face.

Still, time waits for no man, and Frye is now two-hundred-and-eighty-five years young (or perhaps forty-one, depending on one’s sources). In the opposite corner stands Thompson, centuries younger, inches taller and about twenty-five pounds heavier than Frye, with a very angry look on his face.

Thompson has had recent mixed fortunes to an almost unbelievable extent. Making his name getting knocked out in seconds by Aleksander Emelianenko, he rebounded with a few easy wins. A loss in a war against Fujita signalled a losing streak that was only stopped when he ended up smashing Hidehiko Yoshida in frankly surreal fashion. And then he lost in under a minute to Butterbean. Thompson, then, stands on the pantheon alongside luminaries like Kevin Randleman, as a figure who can win and lose any fight. Granted, that applies in a sense to everybody, but really: bet on Thompson to win and he will lose. Bet on him to lose, and he will astound the odds makers.

Unless one of this pair has been engaging in super secret submission training (or, in Frye’s case, bathing in the blood of virgins in order to reverse the ageing process), this fight is likely to feature a lot of punching. Then more punching, until Don Frye either tires or loses consciousness. However, this being a Thompson fight, we apply the relevant Bizarro Rules, and Frye gets the nod, by the aforementioned KO/tiring.

Deserving less words is the meeting of Yoshihiro Nakao (in a nutshell: kissed Heath Herring, and bored against Kazuhiro Nakamura) and Edson Drago (looked like an unstoppable killer until he fought someone decent, in Pawel Nastula, and got handled with ease). I can only imagine that, aside from necessity being the mother of invention in booking this card, this fight is going to be a showcase for the fists and knees of Drago. One can but hope.

With the one particularly engaging fight of Wanderlei Silva vs. Igor Vovchanchyn now being off the table, there are three remaining confirmed fights.

Most intriguing of these is Ricardo Arona vs. Rameau Thierry Sokoudjou (or just SOKOUDJOU, according to the Pride site). Sokoudjou rose to renown after he blasted Antonio Rogerio Nogueira (reminder: a trained amateur boxer who had never been knocked out in professional MMA competition) into unconsciousness in twenty-three seconds. He litmus test of Sokoudjou’s ability comes in the form of another Brazilian light-heavyweight, even more known for consistency than Nogueira.

Arona routinely gets accused of being boring, which is a tad unfair. He was right to be cagey against Wanderlei Silva, but otherwise he has brutalised Kazushi Sakuraba, dominated Alistair Overeem and just came up short against Quinton Jackson in a very compelling fight. Arona is a man who wrestles well, and knows how to use his weight effectively. It would be nice to see his killer instinct more often; perhaps this fight will be the time.

After a feeling out period in which Arona will desperately be trying to avoid the fate that befell his compatriot this past February, things could get interesting. Arona would traditionally go for a takedown when warmed up, but once down there, he might want t be careful. Not to predict an upset here, but Sokoudjou is a national champion at judo who currently trains with Team Quest. While Arona definitely has the edge in experience and in winning big matches, the man from Cameroon may prove something of a spoiler once more.

Shinya Aoki is booked to face Pride debutant Brian Lo-A-Njoe. Little is known by me about Dutch Lo-A-Njoe, other than he is a kick-boxer who won his last fight by choke. He also got choked out by Genki Sudo back in 2001. That would suggest he has either improved his grappling game in that time, or that one Oktay Karatas isn’t very good.

What is known is that Aoki is inarguably one of the deadliest submission artists in the lightweight division (and technically a 170-pounder, as opposed to Lo-A-Njoe’s 155 lb status). It is possible that Lo-A-Njoe might knock Aoki out in this year of upsets, but Aoki hasn’t been knocked out in years. Add to that the fact (made up by me, just now) that good MMA fighters who grapple tend to submit less good MMA fighters who kick box, and this is all Aoki.

Rounding out this rather underwhelming card is Makoto Takimoto vs. Zelg Galesic. Galesic, as those who familiar with Cage Rage will probably tell you, is pretty handy, having ended his last five fights in as many minutes, largely by strikes. Takimoto is coming off two losses, and his best win has come against Dong Sik Yoon (unless you count Sentoryu as a ‘good win’, as opposed to ‘victory column free gift’). I was a tad down on this at first, but it could be entertaining. Can Takimoto’s judo skills undo the striking ability of the Croatian middleweight? Not likely, admittedly, but this is probably the dark horse fight of the card.

So that’s that for Dream Stage Entertainment, and for the active presidency of Sakakibara-san. Let us never forget how he remarked that the pummelled, inhuman, visage of Sakuraba after his beating at the hands of Arona was somehow a good thing. In the light of that, the constant enquiries from Dana White about whether pasty hopefuls ‘wanna be fucking fighters’ is suddenly music to the ears.

All that remains now is for us to take a moment to reflect on our favourite Old Pride moments. That Bushido 9 tournament was something else: made us all believe again, yeah? Or the wicked first Nogueira-Herring fight; what an epic display of superior skill against near-infinite guts that was. It’s sad that what was once an event to be eagerly awaited (even if there was the odd Giant Silva or small native pro wrestler on cards) has been reduced to a card of fights that may or may not be some cop, on a par with 2 Hot 2 Handle or something.

Whatever the future holds for Pride, we will always be able to look fondly back on what once was (with the added bonus of rose tinted spectacles!). One thing’s for sure: this is likely to be an emotional show at the very least, as the Japanese public sees Pride handed over to the new Pride International Holdings LLC. At least Takada-san will be sticking around. Will he be hitting gigantic any more drums while in his pants? Who can say, in this brave new world of MMA.
by throughsilver at Friday, April 06, 2007