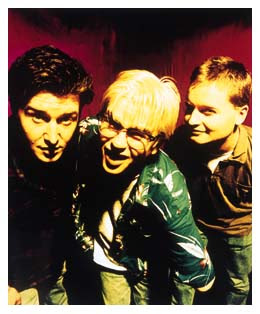 Last, ooh... Saturday, saw the ten year anniversary of my purchasing On the Turn by Kerbdog. In the grand scheme of things, the album is just another one from a forgotten nineties rock band. Kerbdog were an Irish quartet who were signed to Fontana/Mercury at an early age, and released their eponymous debut in 1994. At some point between then and 1996, one of their guitarists, Billy Dalton, left and the band continued as a trio. They got close to the top forty with one or two singles from the Kerbdog album; I guess the biggest one was a tune called ‘Dummy Crusher’ (actually got to #37).

They sounded superficially rather like Metallica did at that stage (growly singing, meaty riffs), just not as good. The songs were energetic and much of a muchness: fine for live performance, for which the tracks had been written in the first place. They started out with little in the way of expectation and, by their own admission, apparently just wanted some beer money.

I first happened upon them in late 1996. As a regular reader of Metal Hammer magazine, I noticed that the mag was fond of Kerbdog, and eagerly awaiting the release of their second album. Like the second Machine Head1 album, On the Turn was due to be released in the latter period of that year, but eventually snuck out in late March 1997. The Machine Head album, The More Things Change…2, was delayed because Robb Flynn was a perfectionist in terms of how the mix sounded. I think Kerbdog’s album was finished and they were just jerked around by their label; it does actually say 1996 on the case.

Whatever the case, I first heard one of their songs on cable music channel The Box, of all places. It was lead single ‘Sally’ and, though I only caught it once or twice (who’d have thought Kerbdog weren’t as popular among phone-in requesters as Spice Girls?), the band definitely had my attention.

The pivotal moment in my history as a Kerbdog fan came with the advent of a free cover-mount Metal Hammer CD. Killing Cuts vol. 1, I think it was. Spring 1997 was a great season to be a teenage rocker, and the CD reflected it. Nestled alongside such Hammer favourites as Entombed and, err, Bodycount3, was Kerbdog. Specifically, a song called ‘Pledge’.

The band had released three singles by this point (and ended up releasing no more, ever), and this was simply an album track, but I was so impressed that I knew I was buying the album on the release date. I was excited for it in a way that I so rarely am nowadays, especially for albums by bands I am not already a major fan of. I blame the internet.

Back to the song: it had solid, heavy-but-melodic, riffs (at one point seeming to quote the intro to ‘Ace of Spades’)4, and the singing was pretty cool. The chorus was the point when I started really being impressed, though; it captivated me with a deceptively simple vocal melody/backing vocals combination (one device singer Cormac Battle seemed very fond of was singing a line and holding the last syllable for the duration of the next line). The love was complete after the second chorus, when the middle eight struck and I was introduced to the gorgeous harmonies that, again, would prove cornerstone to the Kerbdog sound. It turned me on, and I couldn’t wait for the end of March to roll around.

…And roll around it did. I steamed over to the local HMV, in a hyper-excited mood, and found it for a penny under a tenner. Chuffed, I also got the debut EP from then-relatively unknown California funk-rock group (though way better than that label implies) Incubus. That year March 31st was a more pleasant proposition than its 2007 equivalent, a fittingly summery day that complemented my purchases perfectly.

I’ll refrain from going into detail on the album right now because I have a 1997 top twenty in the pipeline for some point this year. I will say this, though: while the first half of the album is markedly better than the second, each song has something to recommend it. The finale, the seven minute ‘Sorry for the Record’ may be the best thing on there.

For the most part a slow song filled with regret (‘…in an air of self disgrace / my mouth is dry despite your wine’), the tempo picks up halfway through for a wondrous passage of exquisitely tight vocal harmony. And I mean of a level way beyond Alice In Chains5 and not seen again in rock til Lift To Experience turned up in 2001. This segment subsides, its existence all too fleeting, and gives way to a gradually increasing reverberation of noise. Initially just a louder-and-louder replay of the existing riff, the static builds and relents into feedback. In a nice touch, the feedback decays, the disc finishing with Cormac’s disembodied voice, a ghost in the machine, reciting the opening line of the album.

As with a lot of my favourite albums, this one took a while to really establish itself in the pantheon. Reasonably similarly-styled albums came and went, some (by NOFX and Kilgore) built their own momentum while others (Life Of Agony, Second Coming, Liberty 37) left with not much to say. On the Turn stands on its own, a strange mix of Beach Boys harmonies, gigantic guitars (and I mean way heavier than Metallica or Megadeth were selling at the time) and a strange sense of underground crunch.

When Metal Hammer (specifically Dan Silver) reviewed the album, references were made to D.C. hardcore, while a regular journo referent of the time for them was Minnesota’s Hüsker Dü. Personally, I thought they sounded more like a much heavier Sugar (who I was exposed to just after getting into Kerbdog); like if Copper Blue had reason to be released through Roadrunner or even Amphetamine Reptile, rather than Creation6. Battle’s vocal timbre was oddly reminiscent of Mould, even down to that slightly nasally-congested delivery. Away from the harmonies, and the Hüsker Dü comparisons seemed more apt: Battle sang with a passion that sent him more often than not into screaming territory.7

Hmm, I’m reviewing the album again. Rest assured, I love it, and likely always will. As well as being a ferociously emotional album with riffs and vocal harmonies that outstrip anything from Cheap Trick to the Wildhearts, it reminds me of being sixteen; of summers days and that joy of discovery.

It didn’t end well for the band. Due to the delayed release of the album, their promotional tour came and went before the album hit shelves. They didn’t tour again before getting dropped by the label in late 1997, then splitting. They were one of the key bands whose lack of success annoyed me intensely, even though they were a touch too heavy for the mainstream (which admittedly was coming out of the Britpop doldrums, what with the second Supergrass album, the self-titled Blur one - better than what preceded, at least - and OK Computer), and Radio 1 had long ditched their rock show.

Battle (along with Kerbdog drummer Darragh Butler and new bassist Mick Murphy, who filled Colin Fennelly’s shoes) returned in late 1998 with ‘No Worries’, the debut single from new band Wilt. Post-Kerbdog depression was reflected in the ensuing albums songs (such as ‘Peroxatine’), despite protestations that ‘nothing is important / everything’s all right’. While brimming with catchy pop rock gems, Wilt overall seemed a tad deflated, beaten down by the stresses of getting messed around by an uninterested major label (come on, even in Metal Hammer, the album only got a quarter-page ad somewhere in the back of one issue).

After a couple of years and one more album (My Medicine, 2002), Wilt faded. Kerbdog actually reunited briefly in 2005, but the scattered shows either flew under my radar or were in Ireland at a time when money was too tight for me to mention (and if they play again, I will most definitely make the trip).

Whether I end up seeing them or not, I’ll always have this album. It’s served me well this last decade, through the bad times and the good. I just thought it might be nice to take a moment to remember this classic album that, to paraphrase Bill Hicks, has enhanced my life over the years. If, by any chance, someone ends up getting into the album from this (doubtful), or it warms the heart of any band members/fellow fans (even more doubtful), then it’s worth the time spent writing. And if not, just sifting through these memories has been a joy in itself.


1 A band who also debuted in 1994, though to more of a fanfare.
2 An amusing title in hindsight as, the more Flynn had messed with the superficial sound of the instrumentation, the more it stayed with the gruff urban-metal template the debut had popularised.
3 Surely you remember Ice T’s rap metal band. The included song, ‘I Used to Love Her’, is actually worth hearing.
4 The album was produced by GGGarth (known for the Rage Against The Machine debut), so this had metal-heavy guitars that came without sacrificing the pop accessibility.
5 Save, perhaps, the heartbreaking ‘Rotten Apple’, off Jar of Flies (1994).
6 Incidentally, I just did some research on Battle, and it transpires that this is his favourite album ever. That explains that, then.
7 OK, maybe there is also a touch of Helmet in their sound.
by throughsilver at Thursday, April 05, 2007