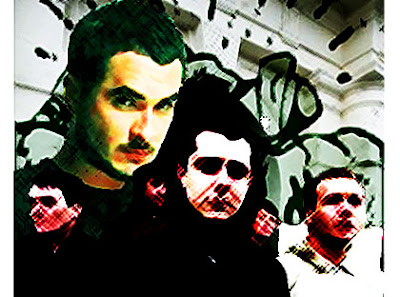 The Twang: What's the Deal?

Seriously, I ask all... two of you that read this. That song of theirs isn't bad at all. Not great, but not bad. But why is everybody going so bananas about them?

So I ended up suffering through the Zane Lowe show last evening. Well, I had to listen to something in the bath. And his pants were exploding about them! Granted, every band in the world is something we all need in our lives and the best thing ever according to him, but come on. At least pretend you have standards. No, instead of their single being perfectly listenable cod-indie, it was the song of the year.

The song of the year. Forgetting, for a moment, that we are still in the very first quarter of this year, there have been loads of better singles this early in the annum. Just look at my Singles Premiership for evidence of that. 'Wide Awake' rocks nowhere near as much as 'Saturday Superhouse'. Nowhere. They played a couple of other songs. One sounded like a Midlands The Hold Steady song. Because that's what it was. They are pretty tight musicians though, I'll give them that. And when he's not fellating The Edge, their guitarist is pretty handy.

That's the thing though. I was watching a Bill Bailey video years ago (not of my own doing). For those blissfully unaware of this gimmick comic, he bases jokes around his aptitude at playing musical instruments, like a particularly annoying high school music teacher who's trying to appear 'hip' in front of the kids. And who uses words like 'hip' in the first place. Anyway, he had a joke about how easy it was to write a U2 song. So he played some arpeggios with tons of delay, and everybody laughed. Now, The Twang seem not to have realised this was a comedy routine, and taken it as career guidance. Sad. What's sadder is that it is just about to make them rather wealthy.

Anyway, they are officially the best thing ever (or at least since the Arctic Monkeys), and shame on any of us who does not like them. Such as me. And they really do sound like a set of complete bozos when interviewed. I am loathe to suffer a decade of their drawling inanity, Liam Gallagher style. LOATHE.

Sorry, had to get that off my chest. Mulholland Dr. review on its way.
by throughsilver at Thursday, March 22, 2007