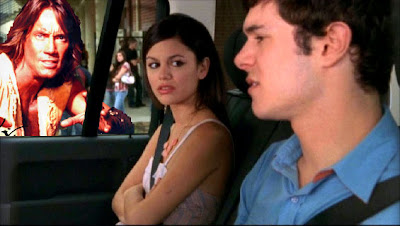 I promised myself (and, by extension, the rest of the world) that I would not fall into the trap of writing weekly updates on Lost, The O.C. or anything else, but notes must be made on recent happenings.

Perhaps news has reached you, the dear reader, of the ongoing discord between Richard Branson’s Virgin Media empire and Rupert Murdoch’s NewsReich. It seems that, due to arms being folded, toys being thrown out of prams and certain executives’ mums being dissed (it was alleged that Branson’s mother was ‘so dumb, she thought a quarterback was a tax refund’), Virgin Media’s digital cable wing might not carry Sky programming for much longer.

The knock-on effect for me is that I (as I signed up with NTL, who apparently got bought out without my knowledge) might lose Lost, 24 and to be honest: not much else. The rest of Sky’s TV (from Britain’s Toughest Pubs III to Dom Joly Traipsing around America Getting Ratarsed and all points betwixt) can fall of the face of the Earth as far as I’m concerned. And they can take Murdoch with them, as they plunge into the wide open nothingness of space, their heads popping in unison like a collection of synchronised Nazi exploding robots.

Anyway, til I find information out for sure, I will shut up about it. Except to mention the strange pauses I experienced while I was trying to watch those two programmes that I like a lot. I am used to signals going on the blink when at friends’ houses. They have crappy antennas, though, not the thick lustrous cable I was blessed with. And the pauses lasted for about five minutes at a time, and I even missed the tag of 24 (that’s the ending, for those of you not au fait with Telly Speak). Weirdly, Sky 2 seemed to work, though I opted for frozen images over the rancid bollockfest that Sky actually produces.

And that got me thinking: maybe Branson was sabotaging Sky broadcasts on his service. After all, Sky was running adverts so masturbatory that I had to wipe the digital semen off my disgusted face: ‘we at Sky make the best programmes ever. Sadly, those bastards at Virgin Media do not want you to see our great shows and have decided not to pay us. Therefore you, the customer, are screwed’.

It might have been a good strategy if they were freezing out the breaks, but they were instead screwing me over, which isn’t quite so effective. Still, I await with baited breath Branson’s next move. Perhaps when Sky goes to break, a machine will whirr into action as the Sky Propaganda Blips come on, flooding the screen with darkness. A disembodied Branson head will then come on, slowly rotating as it intones a looped mantra of ‘Sky sucks, Sky sucks…’, all the while backed by a dubstep re-working of Tubular Bells.

I spotted the presence in tonight’s O.C. credits of one ‘Kevin Sorbo’. The name was just slotted in there, with nary a ‘With Special Guest’ prefix accompanying his name – as though he were merely a regular jobbing actor! In case any clarification were needed – and to those reading this, I would hope not – we are dealing with not just ‘Kevin Sorbo’, but SORBO. You have to read that half-growling, half-shouting, as though you were a cartoon super-villain (or, if you’re into Neurosis, as though you would say ‘windstorm’)

SORBO first found fame in that pulpy, trashy pile of pulp trash Hercules: the Legendary Journeys, wherein he would get chased around by women a lot and constantly have to save his sidekick Aeolus, a squat, gurning character who looked like a kind of ancient Greek Les Dennis. Still, the show was helmed by Sam ‘Evil Dead’ Raimi (who also co-wrote The Hudsucker Proxy, so he gets bonus points til the cows come home) and occasionally featured the king of bit-parts, Bruce Campbell. I am pretty sure I saw SORBO in a Jim Beam ad before this, but what can you do. After this, he went on to star in some Star Trek thing, which is neither as interesting nor amusing.

Anyway, I have to admit I was well pleased when SORBO turned up in Newport. Spying, no less! It turned out that he is a friend of Julie’s current beau, one ‘Bullet’. He got installed in Julie and Kirsten’s bidneth as some kind of financial advisor, saw Julie was running a male ‘escort’ ‘service’, and decided to keep schtum. For a price. When he gave his hotel number to Julie, we all assumed the worst but the reveal was far more dramatic than we could have reasonably expected.

See, when Sandy saw SORBO, he got that sense you get when you think you have seen someone somewhere before. So he did what any sane man does on New Year’s Eve: you go back to your office and pore over files in the hope that you have had dealings with this stranger in the past. Funnily enough, what SORBO wanted from Julie was dirt on the Cohen family. Coincidence, huh. Anyway, the most humongous reveal in the history of the show was oddly not the litany of offences committed by SORBO on the human race, but the character’s real surname: ATWOOD.

While that doesn’t quite work as well in caps as SORBO, it is nevertheless of great import, as it means he is Ryan’s real father. I readily admit that I exclaimed, aloud, and at quite some volume when that happened. The O.C. may well have ended up being watched by about three and a half people, and has now breathed its last, but the ability to enthral is still there; a relief considering the crapulence of last week’s episode.

Anyway, there is still time before the show finishes over here, so perhaps Virgin Media can really quickly fall out with more media conglomerates. The official ruling will apparently come later in the day…
by throughsilver at Wednesday, February 28, 2007