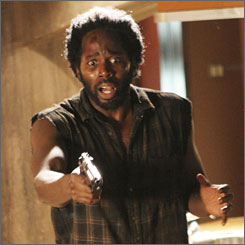 I just saw this week’s E4 episode of Lost. Jack and Kate brought Michael back to the hatch after finding him staggering through the jungle. I thought this was going to be a slightly slow episode, but the formula they seem to be on, of one poor episode and one great one, suggested this might be hot. Last week’s, see, was… not so good.

It concerned the old couple; Rose and Whatshisname. It was a very nice tale of love, and the effort one puts forth in the hopes of not losing said love (I know, I’m such a sweet-talker), but it was all very reminiscent of when Emmerdale has an oldies’ storyline. It’s that kind of thing where they try to come up with something good for those characters – and that segment of the audience – but the stench of obligation emanates like a week-old fish.

So yeah, it wasn’t great, though it sent my mind racing with theories as to what the island represents. See, Rose had inoperable cancer in the ‘real world’, but seems healthy on the island. She knows the island has ‘cured’ Locke, as she saw him in his wheelchair, back in the airport.

Then, of course, was the previous week, with Hurley and his psychological illness. He became convinced, with the help of his imaginary bald friend who fell in love with Charlotte in Sex And The City, that the island was all an imagining of his; that if he jumped off a cliff, he’d be freed from the dream. His gal jumped in to reassure him of the island’s status of Real and then, just as we thought that was over, we saw a flashback of his hospital stay. She was there, all zoned out and sedated!

It got me to thinking that maybe the island is just this big wish fulfilment thing. Locke walking, Rose not being ill, Hurley’s girlfriend being a psychologist on the island (I know, I’ve forgotten her name. I Googled, but the results were getting too close to spoiler status for comfort…

I digress, as per usual. This week was back to being good. I still hate the E4 continuity bloke, as he always feels the need to say what’s going to happen in the coming episode, but anyway. We learned a lot about The Others thanks to our friend Fake Henry (their boss is apparently not very forgiving), and there was a heartening amount of character crossover in Analucia’s airport flashback.

Oh, and Michael woke up.

The last few minutes of the episode, while something I taped, I have watched only the once. I had a bad feeling about the end of the episode, probably stemming from the whole ‘Analucia can’t kill Fake Henry’ thing, but it’s hard to articulate. I was certainly shocked.

I was sitting there, leaning forward with hand over my mouth through the credits and well into the ad break. After a bunch of episodes that largely had weak tags, this was a reassuringly strong ending. Why did Michael do what he did? And not in a melodramatic ‘for the love of God’ angle, but just what was his motivation?

Did The Others get to him while he was allegedly spying on them? Was it some really delayed act of revenge for when she swerved them at the start of the season, coupled with being strung out? Obviously, shooting Hurley’s girl was an act of instinct, and then turning the gun on himself to finish, while staring blankly at Fake Henry… weirdness.

I thought there might have been some form of verbal communication between the two before he did it, but as usual Lost throws up more questions than answers. I really need to find out who it is who sang that song. Anyway, it’s best not to write when too tired, because unfocused rambling like this is often the result.

Bottom line is: Lost has just got really exciting, and at a time when it needed to ratchet up the intensity.
by throughsilver at Wednesday, August 30, 2006 2 comments: Links to this post

So I've just received the latest Boris album. Apparently released in predictably limited numbers last year on vinyl, Inoxia just released the set on double CD. The packaging is excellent (there are six CD-shaped thin paper inserts, three for each disc, that have vague pics of the band members) as per usual, and I figured I might as well learn to use this new-fangled digital camera technology to see what I can do.

Not listened to it yet, but when I get back in I'll give it a spin. Taking a leaf out of the book of Neurosis (who did this with their Times of Grace and Grace set), Boris suggest the listener plays each disc at the same time, on separate stereo systems. Now, I never did it with the Neurosis release (primarily because I refused to pay twice for what was essentially a single listening experience split into two), but I might drag up a little stereo system for this. Not sure how well a combination of my expensive Death Deck and a tinny portable would work, but I'm sure I'll get the idea. Anyway, front and back cover!

Because I am such a consumer, fashionista (har), and all-round collector, I opted to get the t-shirt as well; Boris always makes such nice t-shirts. I had to wait a couple of days after release to make my purchase and, knowing both how limited Boris releases are, and how quick people are to buy things up, I was concerned. Luckily for me, most Metal fans are fatty boom batty, so XL and L were sold out, but my dear Medium tees remained (now sold out. Excellent). And here it is!

In conclusion, this is how my Boris CD collection is currently looking. Very nice indeed. And to prevent this from totally being a teen diary entry, I'll post some Initial Thoughts when I get this listened to. Expectations are high, and all I have to say is: roll on the sunn(o))) collaboration...

by throughsilver at Wednesday, August 16, 2006 No comments: Links to this post