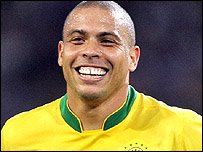 So he’s back. I know he’s not proper back, but the match the other night with Japan was such an immense relief to me. See, I’m not the biggest football fan, and I’m certainly not an expert. But when I get attached to a footballer, I really like them.

Much is made in the football community about not being a “glory supporter”, and rightly so. Back in high school (the dark cultural days of the mid-1990s), many of my peers were Scum fans (sorry, “Manchester United”), and that was only because they won the Premier League constantly. Home being Leeds, the Scum Glory supporters were castigated, and with good reason.

Football fans are known for doggedly supporting their team til the bitter end, whether they be the best in the world (Barcelona), or the lowlier likes of Merthyr Tydfil. Such loyalty in this age of instant fix, celebrity and vicarious existence is refreshing.

However, I have noticed recently that such courtesy ends at the team; there appears to be widespread glory support when it comes to the players themselves.

The example I will use, and the reason for this preamble, is none other than that most frustrating of heroes, Ronaldo. And I mean the proper one, not the young Portuguese pretender to the throne.

A few years ago, Ronaldo was the talk of the town. The greatest player in the world, he could do no wrong. Then comes injury, followed by less inspired playing. Talk before the current world cup was about how much Ronaldo weighed. “He looks a little heavy to be leading Brazil to victory”, many mused. 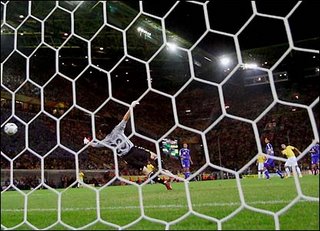 Brazil head coach Carlos Alberto Parreira tried reassuring concerns, suggesting that Ronaldo is well aware of how important the tournament is, and he will lose the weight. Were this concern not enough, the hype machine was generating plenty of noise about those players younger and more exciting: Ronaldinho and Robinho. The former is arguable the world’s current greatest player, the latter apparently the icon of the future.

Our man Ronaldo was somewhat lost in the shuffle. I’ll stand by my favourite footballers, and like I have with Zidane, I got stick for supporting Ronaldo in the oh-six. Early world cup performances this year did the erstwhile Greatest no favours, especially when substitute Robinho did a lot to increase the pace of an overall disappointing Brazil side.

I was told that this was it for Ronaldo; that he was not going to start any more games as long as Robinho was on fire. Then came the Japan match.

Watching BBC just before the match, I saw Portugal (and ex-Brazil) coach Luiz Felipe Scolari being interviewed by Leonardo. Asked his opinion on the hot topic of the cup, Big Phil remarked that you should play Ronaldo, even if he is at 60% - he’s still better than most players.

I was surprised to see both Ronaldo and Robinho in the starting line-up, this past Thursday. Surprised and relieved that my favourite had another chance to shine. Yeah, he was mocked for his supposed lack of mobility by the likes of Alan Hansen, and he is far from the Ronaldo of old, but he performed.

There was a hunger to his performance I hadn’t seen from him in ages. He wanted to score, not just to confirm Brazil’s superiority of their group, but to send a message to all those who would doubt his skills.

From early in the match, he fired off shots, and good shots at that. For a while, it seemed as though Ronaldo was destined to be denied by a combination of the fates and an excellent performance from Japanese keeper Kawaguchi.

Thankfully, the duck was broken right at the end of the first half. After a breakaway Japanese goal, Ronaldo was on the end of a Cicinho header, directing the ball goalward with his own cranium. Brazil had equalised, but far more important was that Ronaldo had sent a message to his detractors: he is still a danger. 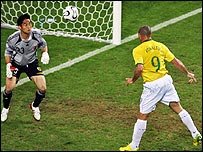 Inspired by a first half performance that saw little in the way of running but some fine shots, his second half was even better. Great interplay with Ronaldinho was unfortunately denied, but in the eighty-first minute, Ronaldo found his way into the record books, equalling the most world cup goals scored by anyone with a wonderful strike.

In prime position for a cross, Ronaldo received a pass from the excellent Robinho, pivoted on the spot, and blasted the ball – with his head down and an almost sixth sense – straight past Kawaguchi. 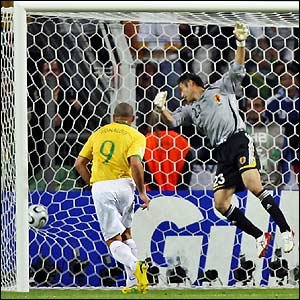 And so the match ended, 4-1. Brazil were back to their artistic, dominating ways (though not yet at their best), and Ronaldo was back to scoring. Two goals in one game, and 14 in the world cup tournament as a whole (a feat only equalled by Gerd Muller).

Big Phil and his “60%” theory were right, the glory supporters wrong – for now. Overweight? Yep. Done? Not for a while…
by throughsilver at Friday, June 23, 2006 1 comment: Links to this post

So Blogger went a bit weird on me. I decided to re-size the font on my last entry, and when I clicked [submit], the whole thing deleted. Not a fan of that. Anyway, here is the video once more.

Again, it’s one of my favourite songs ever, and it blows my mind to think it was a single. In fact, I remember when I first heard it, and I wasn’t a fan at all. I was watching a Def Leppard Headbanger’s Ball special (they were just about to release the mediocre Slang), and this video just popped up halfway through.

Sadly, I saw that the video was some longhair sitting at a fire in the woods, and decided it was just some random Black Metal a la Ancient or Immortal (the latter are better than I gave them credit for all those years ago). Think that was the point I leaned on my good friend, the Fast Forward button. You had to do that a lot with that show; there would be the occasional gem (like ‘Holy Wars…’ or some Helmet), but the discerning viewer would always have to vigilant, lest Clawfinger found their way onto the screen.

Anyway, didn’t like them, and left it at that, til I actually bought the CD and loved it. Err, but that’s all here. This, instead of that understandably cheap clip, is an excellent live performance of the song, from Ozzfest 1996. God, that name reminds me of the time I got tickets for the UK Ozzfest show in 1998. Purely for Neurosis (in fact, Jon Clayden from Pitchshifter told me that was the only reason his band agreed to play, throughsilver says, namedropping. I stole beer off that dude back when I used to drink. He wouldn’t have cared; they had riders).

Then they announced they weren’t gonna bother playing, because they were in such an intense headspace while recording their new album that they couldn’t stop it just to play in the UK. Insult to injury was that the album (1999’s Times Of Grace) wasn’t that great. I mean, it was better than most bands out there – better than bloody Isis – but for them it was a tad too ‘normal’.

And the replacement? (hed)p.e. Great. I suppose the logic there was that each band had six members, because it sure was hell wasn’t a quality-for-quality trade. Still, there were great bands playing; you can’t really argue with Sabbath, Pantera (!),Slayer, Fear Factory, Entombed… and the odd sight of Life Of Agony playing with Whitfield Crane from early 90s slack-rockers Ugly Kid Joe! That was surprisingly good.

And nu-Metal bores Korn and Limp Bizkit dropped out, to be replaced by the far harder-rocking (especially on that day) Foo Fighters and Therapy? So it was all good. Granted, the utterly useless Coal Chamber played, but I was so knackered (I’d been to a club the night before and not slept) that I snoozed through them! sadly, said state meant I barely remember the one time I’ve seen the Foos, but as my lasting memories are Slayer, Sabbath and Pantera, I’ll live with that.

I did see Neurosis on two separate occasions, but that’s probably for another post. I just wanna get this on the board before Blogger decides to blow me up again. Anyway, enjoy!

by throughsilver at Monday, June 12, 2006 No comments: Links to this post