Got Seinfeld For Christmas! 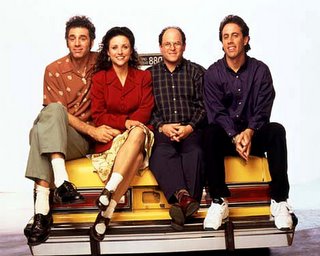 Yes indeed, folks. First new post in over a month, and it's a stupid chatty 'dear diary' kind of missive to self, which is likely indication of an inevitable slide into the (low) quality zone of all other Blogoleums.

Sorry, but you knew it was going to happen sometime.

So yeah, I got Seinfeld, seasons 5 and 6, on DVD. Seinfeld is my favourite - and the greatest ever - programme, certainly in my lifetime. Basic thing about it is that it's a sort of vehicle, sort of ensemble situation comedy show. Thing is, the comedian for whom the show was named is the worst actor on it, and the situation, famously, is that it is 'about nothing'.

Originally, it was devised as 'two comedians go through everyday life, and then comment on it in an episode-ending stand-up segment'. And at first it was. Then the stand-up was used as a sort-of-related bookending device. I think by season 7 they had abolished it entirely, instead focusing on the actual events. Ended up quite minimalist, actually. The intro sequence was just a Seinfeld musical jingle that lasted all of five seconds, and the 'Seinfeld' logo in the corner of the screen. Nice one.

Anyway, I'm not going to go in depth, for much the same reason I choose not to review Through Silver In Blood - I'd go on forever. And I'm long-winded enough as it is.

I'll just say that I'm really happy with this set, as these seasons are possibly the apex of the show (though it was greatness from - arguably - season four til it finished) in terms of quality. Larry David and Jerry Seinfeld are really great writers/producers, and it seems everyone on their team was ridiculously skilled. I was half-expecting the programme to have dropped a bit in my perception with the passage of time, but if anything my time working in telly has led me to appreciate it even more than I did. The writing is just so goddamn tight and brilliant.

In fact, this is essentially the programme that made me think, about a decade ago, that this was what I want to do with my life; hopefully I will. I'll keep writing and see what happens, anyway.

So, the point of this post? No idea. Just that I got 46 episodes of Seinfeld on DVD and they are pretty much all excelllent. Not that I've watched them all since Christmas, mind. Maybe I'll write one or two in-depth looks at episodes at some point.

Like I don't have enough half-finished blog missions as it is...
by throughsilver at Thursday, December 29, 2005 No comments: Links to this post